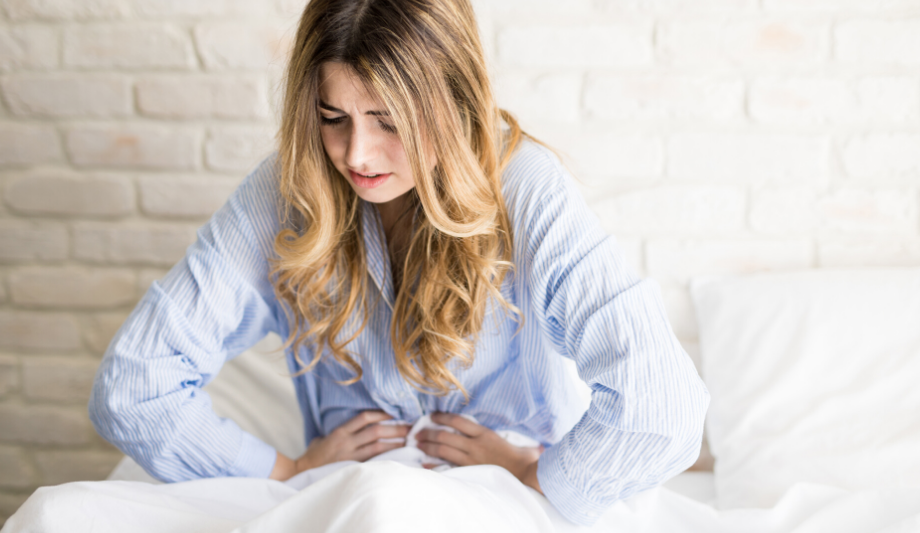 A fair amount of research has been done over the years that shows that Calcium, Magnesium, Vitamin B6, potassium, Zinc, and Vitamin D3 will help alleviate premenstrual Symptoms (PMS), Hormonal Imbalance and Menstrual Cramps. Our MAG365 plus Calcium product is a great formula to help alleviate PMS. According to research, most people do receive adequate calcium levels in their diet, we recommend MAG365BF.

Premenstrual Symptoms or PMS is a varied group of physical and psychological symptoms including abdominal bloating, breast tenderness, headache, fatigue, irritability, anxiety, and depression, that occur from 2 to 7 days before the onset of menstruation and cease shortly after menses begins.

According to Guy Abraham, M.D, in most cases of PMS, there are patterns of hormone imbalance that can be uncovered through testing.[1]

According to Carolyn Dean, M.D., N.D. one of the 22 conditions magnesium deficiency may trigger or cause, is hormonal imbalances including premenstrual syndrome (PMS); dysmenorrhea (cramping pain during menses); infertility; premature contractions, preeclampsia, and eclampsia in pregnancy. During pregnancy, a magnesium deficiency could impose a higher risk of cerebral palsy for your baby and sudden infant death syndrome (SIDS) after birth. [2]

Susan Johnson, a gynecologist at the University of Iowa who helped develop the new ACOG (American College of Obstetricians and Gynecologist) standards says if you are in search of supplements that work to help PMS, you may benefit from calcium and vitamin D, magnesium, and vitamin E. [3] Dr Thys-Jacob has been interested in the relationship of calcium nutrition and PMS for many years. She is an endocrinologist and director of the Osteoporosis Center at St. Luke's-Roosevelt Hospital, in New York City. The 1998 study is a follow up study to one done in 1989. Her earlier study found a 73% improvement in PMS symptoms in women who took 1000-mg of calcium per day for 3 months as compared to placebo. She was the first to identify a relationship between PMS and the symptoms of hypocalcemia or low calcium. Her research indicates that women with PMS have a fundamental calcium deficiency that is unmasked following the rise of estrogen levels during the menstrual cycle.

Her more recent 1998 study found that symptoms of PMS lessened with calcium supplementation at 1200-mg per day. She found that after two to three menstrual cycles, patients who received calcium reported significantly less discomfort associated with almost all reported PMS symptoms.[4]

Before the study with 466 women with PMS from age 18 to 45, the women kept a record of their symptoms for two months which included crying spells, depression, low back pain and headaches. Half of the women received 1200-mg calcium from calcium carbonate supplements or a placebo.

Though there are many great calcium supplements available, it is believed that Calcium citrate is absorbed more easily than calcium carbonate and is relatively inexpensive.[5] So this study was successful even with a less bioavailability calcium source.

The researchers compared the benefits of calcium to taking Prozac (antidepressant) and Zanax (anti-anxiety) for its effect on mood and depression and concluded that calcium was equally as effective for overall PMS relief and calming effect, at a lower cost and without the potential side effects.

Dr. Thys-Jacob has been quoted when interviewed about her study that "Women should also avoid products that cause excessive excretion of calcium like colas. …But if women increase their calcium intake, they won't have any PMS symptoms." [4],[6]

Calcium is the most abundant, essential mineral in the body (approximately 2%), and is critical to many metabolic functions, such as the development and maintenance of teeth and bones, transmission of nerve impulses, control of the heartbeat and blood pressure, muscles relaxation and contraction, maintaining cellular membrane integrity, and enzyme activation. Fluctuating estrogen levels during the menstrual cycle may lead to a calcium imbalance as estrogen regulates calcium metabolism and intestinal calcium absorption. Calcium depletion may interact with estrogen and progesterone during the part of the cycle after ovulation, known as the luteal phase of the menstrual cycle and characteristic of when women get PMS. The hormone estrogen as compared to progesterone dominates this luteal cycle and it is believed that these hormonal changes that naturally occur during this phase mask deficiencies that are present in woman's nutritional status; especially those known to suffer from PMS. These deficiencies affect the balance of these 2 hormones and contribute to the symptoms found in PMS. [6] If you compare the symptoms of PMS to hypocalcemia (low calcium) you will find them to be very similar.

All women have lower levels of ionized calcium with increased levels of estrogen before their periods. Those who suffer with PMS tend to have even higher levels of estrogen. The higher the estrogen the lower the calcium which supports studies that women with increased PMS are more likely to have lower bone density and problems with osteoporosis. Again, the symptoms of hypocalcemia (low calcium) are similar to PMS.

Although calcium supplementation can help PMS, dairy products often actually make PMS worse. This is most likely because calcium needs magnesium to be absorbed. Milk has a ratio of 8:1 calcium to magnesium which is not enough magnesium to absorb all the calcium.

Calcium supplements vary in their bioavailability. When recommending Calcium supplements, be aware that dolomite can have high lead levels, calcium carbonate requires a low pH to solubilize, and often causes gastrointestinal side effects, [7] and bone sourced Calcium may cause consumer concern due to increased awareness of Mad Cow Disease. Calcium citrate is absorbed more easily than calcium carbonate and is relatively inexpensive. [8] Our MAG365BF plus calcium has a high bioavailability because it is combined with magnesium citrate. The reason it is better is the acid pH minerals need to be in a more acidic state to assimilate easily. The magnesium citrate is what makes it acidic in order for it to be assimilated. Food consumption surveys conducted in the USA have indicated calcium intake for women is often below the US recommended daily allowance (1200 mg/day). Our foods also have an average of 30% less nutrients today than 30 years ago. Many sources of food that are thought to contain Calcium according to old nutrient charts (grains, legumes, vegetables, nuts and seeds), are actually low due to low levels in the soil and depletion due to processing and cooking.

Magnesium is an important mineral and is the 4th most abundant mineral in our body. It helps form bones, relax muscle spasms, activate cellular enzymes, and regulate nerve and muscle function (including the heart) and acid-alkaline balance. That is why we call it the "anti-stress" mineral. Deficiency of magnesium is known to cause many symptoms usually associated with PMS, such as irritability, depression, confusion and muscle aches. However, determining if a woman is deficient in magnesium can be a challenge. Many sources of food that are thought to contain magnesium according to old nutrient charts (grains, legumes, vegetables, nuts and seeds), are actually low due to low levels in the soil and depletion due to processing and cooking. Measuring magnesium levels in the blood plasma will often fail to demonstrate low levels, although RBC magnesium levels have been shown to be low in PMS sufferers. [9] Therefore, women who want to have a true picture of their magnesium levels should be encouraged to have a RBC magnesium level done. Estrogen enhances the utilization of magnesium. However, if estrogen levels are high, which is often the case with PMS, and magnesium intake is less then optimal, estrogen-induced shifts of magnesium can be deleterious, leading to muscle spasms, migraine, and other PMS disorders. [10] In one study serum levels of magnesium were inversely related to the serum level of estrogen. [11]

In addition to calcium, magnesium and vitamin E, ACOG (American College of Obstetricians and Gynecologist) recommends lifestyle changes such as aerobic exercise and a complex carbohydrate diet to help relieve PMS symptoms.

As we discussed above, individual nutrients have been found to directly influence PMS. Several studies have noted a marked improvement following the use of a Multi-Vitamin Mineral Supplement which contains the individual nutrients discussed along with a balanced blend of other vitamins and minerals. [57] The preferred supplement must contain sufficient quantities of Magnesium (400mg), Vitamin B-6(50mg) and Vitamin E(400IU) in the d-alpha form.

Vitamin E is a fat soluble vitamin that acts as an antioxidant and free radical scavenger in cell membranes. It occurs in plant food sources but processing, including cooking and freezing, destroys a high percentage of Vitamin E in foods. Supplementation with 400 IU daily has been shown to be advantages for health by favorably influencing lipid profiles, antioxidant status, [19] and heart health. [20] Vitamin E has also been found to help reduce many symptoms associated with PMS. [21]

Vitamin B6 naturally occurs in three active forms: pyridoxine (PNP), pyridoxamine (PMP) and pyridoxal (PLP) of which 90% percent of vitamin B6 is in the latter form. Vitamin B6 is essential in the breakdown of carbohydrates, proteins and fats. Pyridoxine is also used in the production of red blood cells. Vitamin B-6 is a coenzyme intimately involved with many vital processes such as the formation of amino acids, hormones, and neurotransmitters including serotonin and dopamine which affects mood regulation. Several studies show that supplementing with this nutrient (50 mg/day) alleviates PMS symptoms, especially those related to mood. [14] [15] However, other studies contradict this finding, and conclude that Vitamin B-6 is not a proven treatment for women with PMS [16]. Phosphorylation of Vitamin B-6 into its active form (pyridoxal-5-phosphate) takes place in the liver. Inefficient liver function, often present in women with PMS, can lead to conversion difficulties. Vitamin B-6 can also be found in many foods, including liver, meat, brown rice, fish, butter, wheat germ, whole grain cereals, and soybeans..

Dosage: The RDI ranges from 1.3-2.0 mg/day, but a useful therapeutic dose is 25-50mg/day. Sufficient magnesium is required for utilization of B-6.

Cautions: Symptoms of sensory neuropathy have been noted due to overdose of B-6 at levels as low as 200mg/day. [18] More than 500mg can cause irreversible nerve damage which can cause impaired walking, numbness, tingling and poor sense of touch.

Research results on the efficacy of the use of supplemental oils for PMS vary in outcome. While fish oil has several positive outcome studies, [58] the popular use of Primrose oil for PMS is not well supported by study results. [59] Since many women with PMS do not consume a sufficient amount of Omega 3 fatty acids, it is prudent to supplement with EPH-DHA, fish oils, or flaxseed oil.

Will MAG365 or MAG365BF work for you? Well, that depends as there are many reasons for PMS, hormonal imbalance and menstrual cramps during your menstrual period. However, the above research shows how it did help many people. You don't have much to loose from trying this product as 60-95% of the population is magnesium deficiency according to leading sources. Magnesium is necessary for over 350 body functions and testimonies include insomnia relief and stress relief when taking this supplement. Many symptoms, such as irritability and anxiety are helped by magnesium which can be related to PMS but could be a separate issue. Women’s bodies are very complicated and so are symptoms like PMS. Whether you suffer from PMS or hormonal imbalances or not, you only stand to benefit from supplements like Calcium, Magnesium, Vitamin D, Vitamin E and Vitamin B6. It is well known too that women need extra calcium to combat osteoporosis and that is one more reason to try Calcium as a PMS remedy.

Your Health and the quality time you spend with your loved ones are more important than anything else.